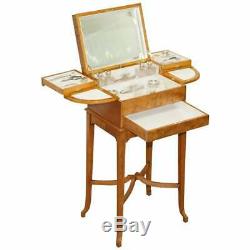 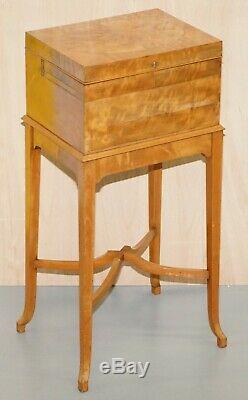 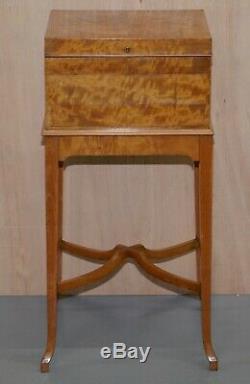 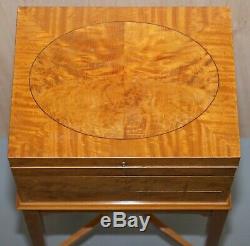 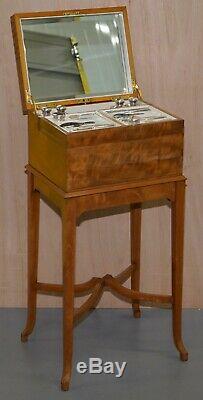 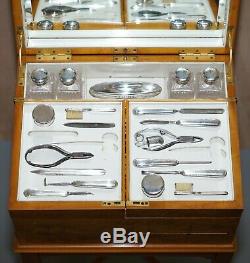 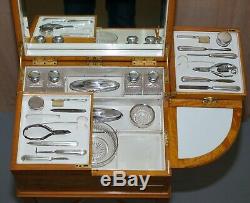 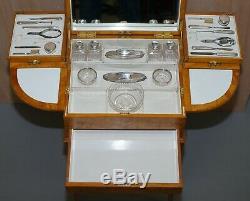 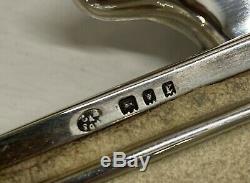 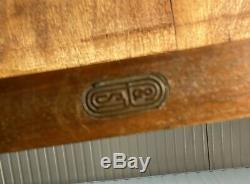 This table is very rare and very unique, George Betjemann famously patented the mechanism for this dressing table, in the top middle you have a depression switch when pressed pops out a hidden base drawer. All the fittings are present and original, the sterling silver is sublime, the engine turned tops are solid silver, every piece is fully hallmarked G.

There are some losses to the nail file kit as you can see, one of the long thin containers is perspex and not glass, it seems totally original so most likely its something that didn't go well with glass. Otherwise its a sublime piece. Please note all measurements are taken at the widest point, if you would like any additional or specific measurements please ask. In 1812 and at the age of 14, George Betjemann started apprenticing as a cabinet maker with his uncle, Gilbert Slater at his premises on Carthusian Street, London. In 1834, George then joined his father-in-law, William Merricks cabinet making business on Red Lion Street, Clerkenwell, London.

George brought his sons, George William Betjemann (his eldest) and John Betjemann (grandfather of poet, Sir John Betjeman), to apprentice with him from 1848. He began his own business at 6 Upper Ashby Street, Clerkenwell, London, and with his two sons having completed their apprenticeships in 1855, expanded to 7 Upper Ashby Street shortly after. In 1859, George moved into 36 Pentonville Road, London (their new family home and business residence) where he continued his business, now called George Betjemann & Sons, alongside his two sons.

George William never married but instead was married to his work, being a true artist and perfectionist. Their work was on display at the International Exhibition of 1862, and the International Exposition of 1867 in Paris. By 1871, they had expanded their residence to incorporate 38 Pentonville Road and were employing 119 people. Records show that by 1875 a further incorporation of 40 Pentonville Road was undertaken.

With Ernests son John (the future poet Sir John Betjeman) having no interest in carrying on the family business, George Betjemann & Sons Ltd finally wound up in 1939. This item is available for collection from our Wimbledon warehouses SW19-3BE, we can have it delivered nationwide to include Scotland Wales and Ireland. Wimbledon-Furniture is a privately owned family ran business out of Wimbledon SW19, we have four large storage warehouses, if you have any questions my number is under the business sellers information, please feel free to call or text. Please view the very detailed pictures as they form part of the description around condition. Please note vintage period and original items such as leather seating will always have natural patina in the form of cracking creasing and wear, we recommend regular waxing to ensure no moisture is lost, also hand dyed leather is not recommended to sit in direct sunlight for prolonged periods of time as it will dry out and fade.

COURIER (LARGE ITEMS ONLY THAT CANT BE POSTED). Whoever delivers will always require help on the larger items to unload, the price you will be quoted will always be based on this assumption, if this is not possible please let us know as it will affect the price to send a two man team. The item "ART DECO GEORGE BETJEMANN & SONS METAMORPHIC DRESSING TABLE STERLING SILVER SET" is in sale since Friday, November 15, 2019. This item is in the category "Antiques\Antique Furniture\Dressing Tables\20th Century".

The seller is "wimbledon-furniture-01" and is located in London Wimbledon. This item can be shipped worldwide.