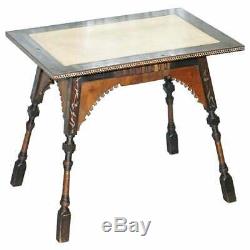 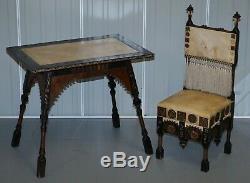 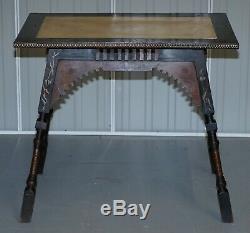 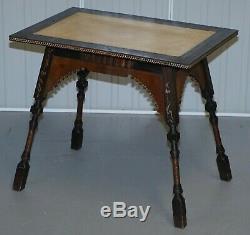 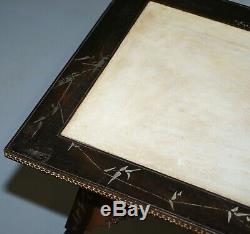 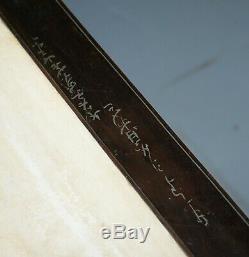 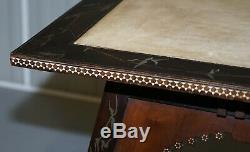 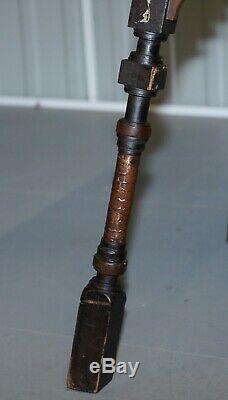 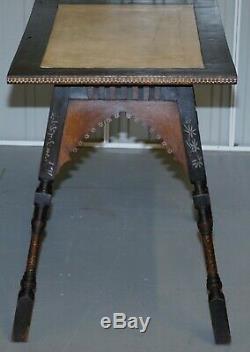 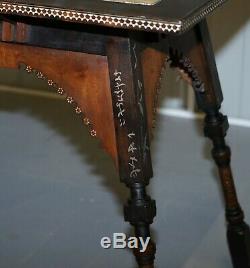 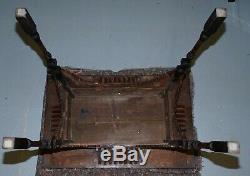 I have the matching side chair listed under my other items, I have included a picture above so you can see the pair sitting together however the chair is not included in this listing. This table is special, designed by Carlo Bugatti, Italy around 1900, its a rectangular walnut occasional or centre table, partly ebonized, with floral inlays made of pewter, the legs partially covered with copper sheet, the table top covered with goatskin, this table was exhibited at the Musee d'Orsay Paris 2001. Bugatti was born 2 February 1856 in Milan, in what would remain until 1859 the kingdom of Lombardy: he died in Molsheim, France. Son of Giovanni Luigi Bugatti, a specialist in interior decoration, Carlo studied firstly at the Brera Academy in Milan, and subsequently, from 1875, at the Académie des Beaux Arts in Paris. In 1880 he started to manufacture furniture in Milan, later transferring to France.

From 1888 he began to be successful beyond Italy. Nevertheless, till 1904 he maintained a Milan workshop in the city's Via Castelfiardo 6. He was also, like his father, trained as an architect, but there is no evidence that any of his architectural designs were ever executed. From 1914 to 1918 he was nominated mayor of the village, and the outspoken anti-German industrialist Adolphe Clément-Bayard, who lived at the Domaine du Bois d'Aucourt, entrusted its upkeep to him. From then on, he devoted himself entirely to painting.

After the suicide of his son Rembrandt in 1916, Bugatti, then 60, produced less, but he remained influential. In 1935, at the age of 79, he retired near his son Ettore's family in Alsace. He settled in a flat north of Château Saint-Jean, Dorlisheim, with his wife Teresa (who died shortly afterwards), at the domain of promotion of Bugatti property of his son Ettore. He spent his last months at his apartment at the Bugatti factory in Molsheim, where he frequented the workmen and the house of'the Hardtmühle', living with Ettore and his family. In April 1940, he died at the hospital in Molsheim.

He is buried in the Bugatti family cemetery at Dorlisheim. The Bugatti section of Molsheim's municipal Musée de la Chartreuse displays works and items in his remembrance. This table is unrestored and totally original, there are some light losses to the inlay and small timber losses, I can see inside some old fillers, we have lightly cleaned waxed and polished it from top to bottom.

Please note all measurements are taken at the widest point, if you would like any additional or specific measurements please ask. This item is available for collection from our Wimbledon warehouses SW19-3BE, we can have it delivered nationwide to include Scotland Wales and Ireland. Wimbledon-Furniture is a privately owned family ran business out of Wimbledon SW19, we have four large storage warehouses, if you have any questions my number is under the business sellers information, please feel free to call or text. Please view the very detailed pictures as they form part of the description around condition. Please note vintage period and original items such as leather seating will always have natural patina in the form of cracking creasing and wear, we recommend regular waxing to ensure no moisture is lost, also hand dyed leather is not recommended to sit in direct sunlight for prolonged periods of time as it will dry out and fade.

COURIER (LARGE ITEMS ONLY THAT CANT BE POSTED). Whoever delivers will always require help on the larger items to unload, the price you will be quoted will always be based on this assumption, if this is not possible please let us know as it will affect the price to send a two man team. The item "IMPORTANT AND RARE ORIGINAL CIRCA 1900 CARLO BUGATTI OCCASIONAL TABLE EBONISED" is in sale since Tuesday, April 7, 2020. This item is in the category "Antiques\Antique Furniture\Tables\Victorian (1837-1901)". The seller is "wimbledon-furniture-01" and is located in London Wimbledon.