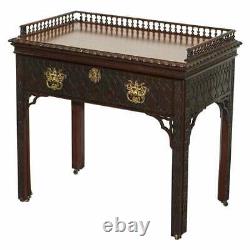 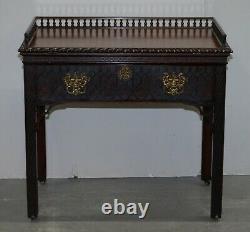 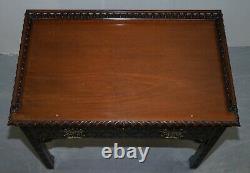 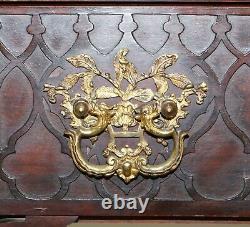 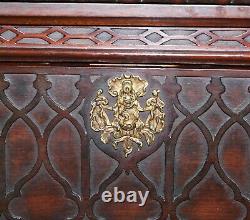 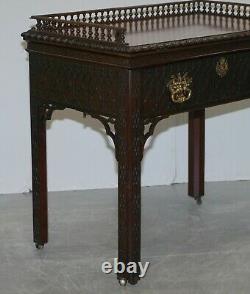 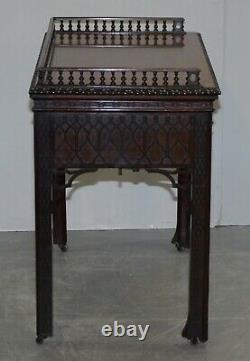 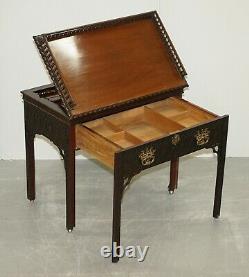 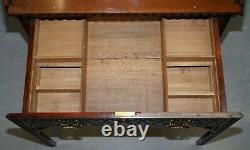 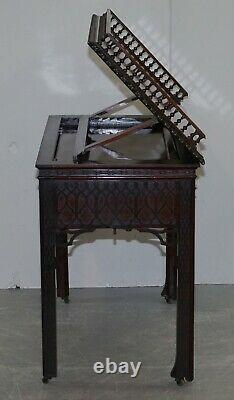 Most certainly made in the workshop of Thomas Chippendale, there are multiple references to this particular type of carving and of course the double fronted desk in The Gentlemans and Cabinet Makers Director by Chippendale. This piece really is a tour de force of craftsmanship, it is simply put the finest desk I have ever seen in real life. In terms of the functionality naturally the front section slides forwards on the period castors, you have two hidden compartments and two hidden drawers, the top lifts up and can be used in multiple positions. Condition wise there are some losses and patina, all of which can be restored for the cost price by my cabinet maker and French polisher, I have left them as they are for now so the new owner can decide.

As mentioned, I can have this restored perfectly should the new owner wish. The only other point to note is the lock has a later replacement internal without key. Please note all measurements are taken at the widest point, if you would like any additional or specific measurements please ask. Thomas Chippendale (17181779) was born in Otley in the West Riding of Yorkshire, England in June 1718. He became a cabinetmaker in London, designing furniture in the mid-Georgian, English Rococo, and Neoclassical styles. In 1754 he published a book of his designs, titled The Gentleman and Cabinet Maker's Director, upon which success he became renowned. The designs are regarded as representing the current British fashion for furniture of that period and are now reproduced globally. He was buried 16 November 1779, according to the records of St Martin-in-the-Fields, in the cemetery since built upon by the National Gallery. Life A Design for a State Bed from the Director, 1762. Chippendale was born the only child of John Chippendale (16901768), joiner, and his first wife Mary (née Drake) (16931729).

He received an elementary education at Prince Henry's Grammar School. The Chippendale family had long been involved with the wood working trades and so he probably received his basic training from his father, though it is believed that he was also trained by Richard Wood in York, before he relocated to London. Wood later ordered eight copies of the Director. On 19 May 1748 he married Catherine Redshaw at St George's Chapel, Mayfair and they had five sons and four daughters.

During 1749 Chippendale rented a modest house in Conduit Court, near Covent Garden. In 1752 he relocated to Somerset Court, off the Strand. In 1754 Chippendale relocated to 6062 St Martin's Lane in London, where for the next 60 years the family business operated, until 1813 when his son, Thomas Chippendale (Junior), was evicted for bankruptcy. Rannie and his bookkeeper, Thomas Haig, probably cared for the finances of the business. His wife, Catherine, died during 1772. One of Rannie's executors, Henry Ferguson, became a third partner and so the business became Chippendale, Haig and Co. Thomas Chippendale (Junior) assumed management of the business in 1776 allowing his father to retire. He relocated to what was then called Lob's Fields (now known as Derry Street) in Kensington.

Chippendale married Elizabeth Davis at Fulham Parish Church on 5 August 1777. He fathered three more children. In 1779 Chippendale relocated to Hoxton where he died of tuberculosis and was buried at St Martin-in-the-Fields on 16 November 1779. There is a statue and memorial plaque dedicated to Chippendale outside The Old Grammar School Gallery in Manor Square, in his hometown of Otley, near Leeds, Yorkshire.

There is a full-size sculpted figure of Thomas Chippendale on the façade of the Victoria and Albert Museum, London. Royal House Antiques is a privately owned family ran business founded in Wimbledon SW19 and now based in Pulborough RH20. We specialise in finding, restoring very fine luxury antique leather seating, along with every single other type of antique ranging from the 16. We also stock a number of designer brands such as Fritz Hansen, Ralph Lauren, Cavalli, Charles & Ray Eames, Vitra, David Linley, Rolex, Tiffany, Jager Le Coulter and so on. Please view the very detailed pictures as they form part of the description pertaining to the condition.

Royal House Antiques cannot be held liable for any independent assumptions made regarding the items we sell, if you are unsure on any point, please feel free to ask for clarity. Please note vintage period and original items such as leather seating will always have natural patina in the form of creasing and wear, we recommend annual waxing to ensure no moisture is lost, also hand dyed leather is not recommended to sit in direct sunlight for prolonged periods of time as it will dry out and fade. COURIER, LARGE ITEMS ONLY THAT CANT BE POSTED. Whomever delivers will always require help on the larger items to unload, the price you will be quoted will always be based on this assumption, if this is not possible, please let us know as it will affect the price to send a two-person team. The item "ORIGINAL THOMAS CHIPPENDALE GEORGE III MAHOGANY ARCHITECT'S WORK DESK TABLE" is in sale since Thursday, April 8, 2021. This item is in the category "Antiques\Antique Furniture\Desks & Secretaries". The seller is "royal-house-antiques" and is located in Pulborough.